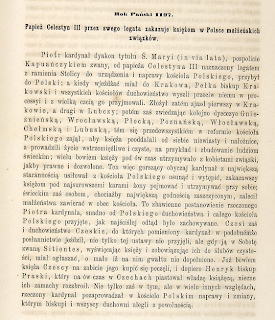 Year 1197. Peter the cardinal, diacon of St. Mary title, commonly called Capuan assigned by the Pope Celestyn III to be a legat for the reform and restoration of the Polish Church arrived to Poland, and when he was to enter Cracow, Pelka the bishop of Cracow and clergy of all churches came to meet him in a procession and were acquiring him with great honors. He hold the first convention in Cracow and a second one in Lubcza, then visiting the dioecesias of Gnesno, Vroclav, Plock, Poznan, Vloclavek, Chelm and Lubusza he concentrated first of all on that that the (Catholic) priests dismissed all ladies and mistresses and have pure and temperate lives as an example and pattern for the non-clergy, since many priests at that time had contacts with women as lawfully allowed. So the cardinal with great care tried to eliminate this bad habit from the Polish Church, forbidding the priests under most severe penalties to marry wives and to keep them. To the non-clergy men, even the most significant ones, he obligated them to get married in Church. (...)

Posted by Pawel Biernacki at 8:06 PM