My kid likes Star Wars and Donald Duck. Also the fairy tales of Hans Christian Andersen. And Stanislaw Lem. Lem used to be one of the best writers, not only polish, but in general. It is a privilege to be able to read his books in the original. I lived in Cracow years ago and had a chance to meet Stanislaw Lem twice. I did not speak to him, there were just some meetings with his enthusiasts, like me. There was not enough time to speak, and after all, I am just one among the thousands who like Lem. My favourite book of him are "The stories of pilot Pirx" and "Golem XIV". My kid knows one of the stories ("The hunting") and he likes it, too. The "Droids' fairy tales" also, although I think they are still a little too difficult for him. In fact they are not fairy tales for children.
Posted by Pawel Biernacki at 4:48 PM No comments:

"Quo Vadis" is a novel by Henryk Sienkiewicz, an excellent polish writer. There have been several movies based upon this novel. I want to write about my theory concerning this book. First of all it was published in the XIX century, about 1895. In this time it was very common to write allegories. My theory is that "Quo Vadis" is an allegory, too. I think that the following parallels hold:

1. Kaiser Wilhelm II was mentally sick. Sienkiewicz may have known about it and it is known from his public papers he hated Wilhelm. Neron is a crazy tyrant, a despot. Kaiser Wilhelm was very active, he was a hunter, an automobilist, an artist. Neron does the same, he acts in a circus as histrio, he sings, even dances.

2. Petronius is an ideal person. Wise, elegant (arbiter elegantiarum), good for his slaves. Sienkiewicz wanted to portrait the caesar Franz Joseph and compare him to Wilhelm. Sienkiewicz loved Franz Joseph and he writes about him as the only person who let the Polish people to love him. Petronius is militarily weaker, he does not have the pretorians, but he has a huge advantage over Tygellinus and Neron himself. An intellectual and moral advantage.

3. Chilon Chilonides. In 1866 the Prussians won a war against Austria and then an interesting event happened. The king wanted to go on and strike against Vienna, while Bismarck opposed this idea for political reasons (he was afraid of France). Chilon is an accusation, it is a suggestion that Bismarck was a spy working for Petronius (Franz Joseph). Sienkiewicz says that Bismarck was arguing with the king because he was a spy. But then something wrong was done to him and he switches his sympathies towards Neron. Because he cannot hurt Petronius directly he accuses the Christians. This is Sienkiewicz's theory about Kulturkampf, he thinks Bismarck hurts Polish because he wants to hurt indirectly the Austria. I also think that the name "Chilo" contains the first letters of a phrase beginning with "chancellier" and ending with "Otto", this is an analogy to the word "ichtos".

4. Ursus - this is the only Christian who has a Latin name rather than Greek one. This name means "a bear". Ursus is an allegory of Germany - Germany in a way betrayed the Austria and after the prussian-french war in 1871 joined the Prussia, which was stronger. Sienkiewicz thinks that Germany should "break the prussian neck" and come back to the rightous ruler, who is Franz Joseph. Just like Lygia is returned to Vinitius. The name "Ursus" must be Latin, because Germany is the Holy Roman Empire.

Again - this is just a theory. "Quo Vadis" (meaning "where do you go") is actually addressed to Germany, and the sense of the question is that Germany have to go back to Rome. Rome and Austria were playing in the same team, while the Prussians were protestants.

I think Sienkiewicz wrote this book and suggested only very few persons how to interpret it. Possibly this book was a political weapon used against Wilhelm II.
Posted by Pawel Biernacki at 10:13 AM No comments:

Hi! A small gift for your kids. spaceship0.tar.gz - unpack it, print out, cut and fold to build a kind of a spaceship model.

I have written some scripts constructing such models for my own kid. I have also some scripts creating buildings with textures, like this one: 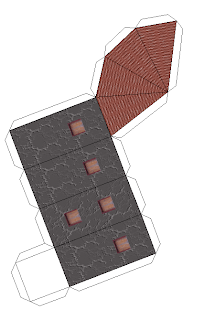 Posted by Pawel Biernacki at 2:29 PM No comments:

Writing about the lack of discipline I forgot about the violin. He is playing violin and it requires a lot of training. He does do it. There is even a country song he likes playing, it is a polish song called "Manitou". It is very funny, probably that is why he managed to learn it quite well. Initially we were both attending the violin lessons, but then I gave it up. He plays better than me now.
Posted by Pawel Biernacki at 2:21 PM No comments:

Discipline is my failure. We have excellent relatonships, I mean with my kid, but I failed to teach him discipline. He is quite obedient towards myself, but he fails to obey the others. I think he is less obedient than an average child in his age. Unfortunately the teachers complain about it. He has good achievements as a student, but his behaviour is far from perfect, to say the least. I remember I imagined myself in a father's role long time ago and I thought my child would be similar to me. I used to be disciplined at school. He is different.
Posted by Pawel Biernacki at 9:47 PM No comments:

Sauna is something very important in Finland. Everyone goes to sauna. It is not obvious everywhere. I remember once I was with my kid in Poland (Warsaw), in a quite good hotel, and they told me I couldn't take my kid to sauna, because he was under 12. I tried to explain that he got used to sauna, since we lived in Finland. It did not help. In Finland I have once been in a real sauna. There were birches there (to hit one's back and shoulders), a cold frozen lake nearby, and, of course, a lot of beer. It was fun. I think I was the only foreigner, everyone was speaking Finnish. In fact I spoke Finnish too, somehow. The Finns do speak a lot, contrary to the common belief, provided the temperature around them is about 100 degrees (Celsius). Many people have a sauna at home (we do not, since our bathroom is really small). It is a common habit to go to sauna after business meetings. I have even heard that in the old days women used to give birth in saunas. I do not know whether it is true, but I think it is likely.

BTW. This is a piece of code I  once wrote in Perl. It is a maze generator. It is supposed to be unreadable ;)))

Posted by Pawel Biernacki at 1:13 PM No comments:

One more script: movie_maker_scripts4.tar.gz. It is useful when we want to create the credits. Then a single frame will be copied into multiple frames. Usage:

The result frames will be stored in the directory RESULT and numbered from 75 to 149. The image credits.png should be prepared beforehand. In our case it was the following image: 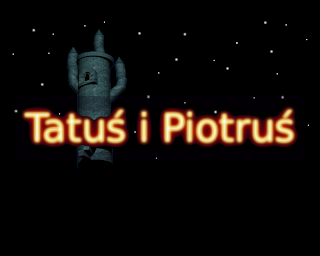 Which means "Daddy and Peter".

Posted by Pawel Biernacki at 2:18 PM No comments:

I have lost in "Risk"

My kid is bilingual, he can speak Polish and Finnish. At home we only speak Polish, he also attends a polish school, once a week. Apart from that he attends a finnish school. He knows also some English due to the Dungeons and Dragons. Also a couple words in German and Russian (he can read a little Russian). He reads a lot in Finnish, especially "Aku Ankka" (Donald Duck). He also likes us to read him books, I usually read him "Cyberiada" of Stanislaw Lem, in Polish of course.

BTW. Yesterday we played in "Risk". It is a kind of a strategic game. I lost. I like this kind of games. I remember I was buying them even when he was too small to play them. I remember for instance he got a game called "Empire" for Christmas. Then he said this was a gift for daddy, not for him. But this "Empire" was really a nice game. Besides it was a good way to teach him a little about the european history and geography. It was about the Roman Empire. We still play it sometimes.

Languages. I mentioned already he creates his own monsters for the Dungeons and Dragons. Then he describes their capabilities in English. Sometimes he does not know how to pronounce words. I was always telling him that the English people had no idea what is an alphabet good for, for example the ending "ough" could be pronounced in seven ways or so. He was laughing;) To be honest we also have some historical issues with Polish, for example there are two ways to write the same phonem. But usually in your own language you do not realize that.

I like Russian and German. I can speak both. Unfortunately I do not speak Finnish, and in Finland almost everyone can speak English. I will have to learn Finnish, though. It is a shame my kid can speak it but not me.
Posted by Pawel Biernacki at 11:18 AM No comments: