We have been influenced by many cultures and we have influenced many. Listen please to this Japanese song:
This is a Polish song, precisely it comes from Silesia. Its original title is "Szła dzieweczka do laseczka".
http://www.youtube.com/watch?v=82bBMxNF9AE
Posted by Pawel Biernacki at 6:13 PM 1 comment:

I have a nice German atlas from the 1928 (Meyers Geographischer Handatlas), and I wanted to show you the map of Poland from that time: 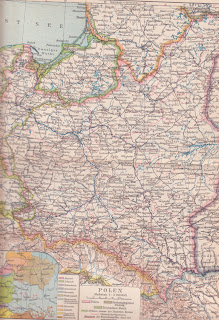 I have also found an interesting link with some translations from Polish: http://polandsite.proboards.com/index.cgi?board=polishliteratureinenglish.

Posted by Pawel Biernacki at 6:12 PM No comments:

I like the old books. My most precious one is "Gedanken und Erinnerungen" of Otto von Bismarck. I wanted to point out an interesting information. 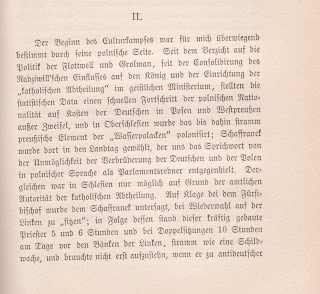 In the middle you will find the text:

There was Schafranek elected to the Landtag there (in Silesia), who was holding as a parliament deputy in Polish language a speech that brotherhood between Germans and Poles was impossible".

My point is that this man, Józef Szafranek, a Catholic priest, was supposed to look after the Silesian interests rather than do anti-German provocations. In the Polish Wikipedia you will read he was opposing the germanization. Well, he chose an unusual way to oppose it. In my opinion he was asking for troubles. Most probably he did not care about the consequences for the Polish people, even worse, considered any bad consequences good, since politically it would strike the Germans if they persecute the Poles. And this really happened. I am sure his motivation was exactly the same as the Pope's one when declaring the infallibility dogma in the 1870. It was an anti-German provocation and it was so understood by Otto von Bismarck. This was the begin of Kulturkampf in Germany.

Posted by Pawel Biernacki at 6:35 PM No comments:

Jan Kochanowski was one of our greatest poets. He was writing both in Latin and in Polish. Below is my translation of one of his poems: